Webster’s defines graceful as displaying grace in form or action: pleasing or attractive in line, proportion, or movement. It also lists its antonyms as: awkward, clumsy, gawky, graceless, klutzy, lumbering, ungainly, ungraceful. Guess which ones more accurately describe yours truly?

While watching TV, yesterday afternoon, I managed to spill an entire cup of coffee all over myself. What was I doing, you ask? Absolutely nothing. That’s right. Sitting still, not doing a damn thing – not even reaching for the remote. Yet I still managed to spill the entire freshly-poured (because it wouldn’t be nearly as fun-filled were it almost empty or cold) mug all over myself. The good news is, though, the coffee missed the sofa entirely… because it ALL landed on me. From crotch to calf – covered in hot coffee. Yep. I am that proverbial bull in a china shop. I like to think it’s part of my charm.

Despite my lack of dexterity, I do fancy myself as a bit of a culinary genius. Yep. I said it. I’m not even going to feign modesty. It would  be vulgar.

My pal Serena over at the urbanpocketknife made this yumalicious no-bread pizza that I just had to try out. So I picked up all the fixins so I could have it for dinner last night. The thing is, she’s a super fit, sporty wee thing so I had to slightly Weezie-fy the recipe for my purposes. But you can see the original, in all it’s cheese-tastic glory and with step by step instructions, here. 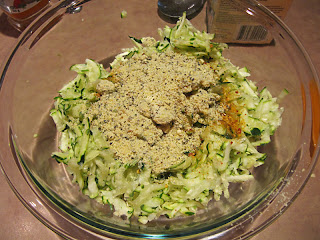 I swapped out the two eggs for 6 tbsp. of liquid egg whites (the carton claims that 2 tbsp is the equivalent of one large egg white, so I figured it was a fair trade), and added a tsp. of Clubhouse Roasted Red Pepper & Garlic and 2 tbsp. of  Parmesan & Herb spice instead of the half cup of parmesan cheese. Other than that I followed the rest of the recipe pretty closely. And, when you compare just over 400 calories for the entire pizza with over 200 per slice of regular take-out ‘zaza, it’s pretty easy math.

This pizza (I’m italicizing because the end result is quite different from your garden variety pizza) smelled like a dream. I mean – I’d been suffering from allergies all day and was completely stuffed up – but I could still smell the awesome!

And the flavours – oh yes, definitely worth the trouble and time it took to shred the zucchini and pat it dry. And while we’re on the subject: be sure to wring out ALL of the liquid. I was pretty thorough and I still think it could have used a few more hearty squeezes.

If you’re looking for an authentic pizza experience, I think you’ll pretty much have to stick with a dough-type crust. But, perhaps the original recipe holds up a bit more closely in texture. I think the next time (because there will be a next time) I’ll make it with a more casserole-type feel. Instead of using a pizza pan, I’ll use a baking pan and bake it for a wee bit longer.

I’m guessing the original recipe is what allows the crust to be more crunchy but I wanted to swap out the extra calories that eggs and parmesan cheese would have added. And I’m glad I did. Because one of the benefits of being married to a die-hard meatatarian is that, when I whip up tasty dishes like this, I don’t have to share! 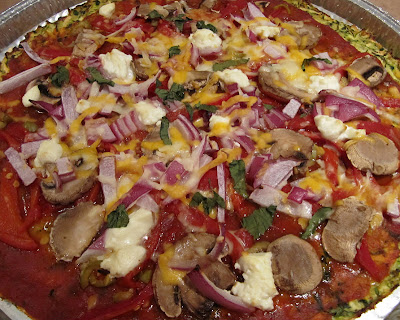